The Raiders return to GIO Stadium for the first time in season 2018 for their clash with the Newcastle Knights on Sunday night.

After a narrow 30-28 loss to the Gold Coast Titans to start the season, the Raiders will be looking to bounce back strongly and record their first win of the season.

The Knights travel to Canberra off the back of a golden point win via the boot of Mitchell Pearce 19-18 over the Manly Sea Eagles in round 1.

The Raiders will be without Joseph Tapine for the match up with the back rower out due to a dislocated finger against the Titans.

Elliott Whitehead shifts to the edge with Luke Bateman joining the starting side at lock and explosive new signing Charlie Gubb to join the bench.

The Knights will be aiming to start the season strongly with back to back wins although the Raiders will be eager to grab their first competition points of the season.

Last Time: The Raiders faced the Knights in Round 25 2017, with the Raiders proving to be far too good at home coming away with a 46-28 victory thanks to a Jordan Rapana hat trick.

Despite that result, the Knights side is full of fresh faces with only five players from the clash being listed in the Knights seventeen this week proving a different task.

Coming up against the incumbent New South Wales Origin halfback is a great test to see where Sam Williams is at as a player after his stint in the UK and his impressive round 1 return to the club.

Mitchell Pearce couldn’t have asked for a better start to his tenure in Newcastle with his match winning field goal proving the difference late in extra time gifting the Knights a morale boosting win.

The proposition of two well organised halfbacks running the ship for their clubs, expect one of these two to be the reason their club gets the win on Sunday.

Two of the more experienced players for their clubs, Josh Papalii and Aidan Guerra are both Queensland Origin forwards with a mass of experience at NRL level to match.

Papalii will be looking to start the season well and keep his name in the mind of Queensland selectors after he featured in all three Origin games in 2017.

Guerra is not currently in the Origin set up with his last game being in Game 1 2017, so he will be eager to come up against a direct rival for a 2018 Origin berth.

Winning the Dally M NRL Rookie of the Year in 2017, the expectation on Nick Cotric’s shoulders is massive as hype continues to build on the talented youngster.

He faces up against one of the cult heroes in the NRL, Nathan Ross, also known as ‘White Lightning’ due to his sheer speed and finishing ability being at a premium.

Speed and size make this a mouth watering match up with plenty of attack streaming down that edge.

Quote of the Week

“Everyone’s disappointed with how things panned out over the weekend but at the same time we’re all determined to put it right this weekend,”. -Shannon Boyd

This weekend is the 49th occasion these two teams meet with the Raiders coming out on top on 27 occasions and the Knights with 19 as well as two drawn matches. 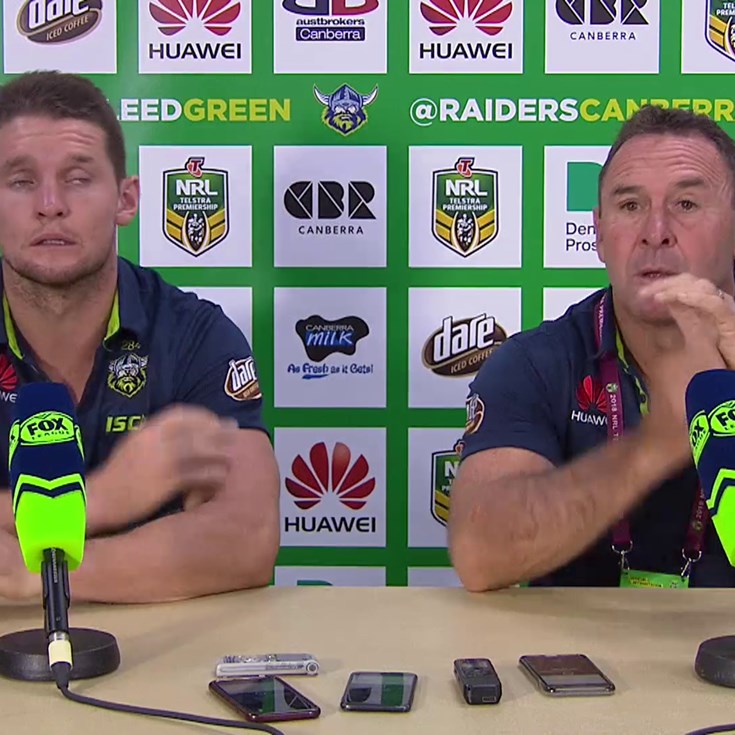 Round 2: The Final Word