The Raiders were dominant in their 18-2 defeat of Parramatta, keeping the Eels tryless on a wet and windy Saturday night at GIO Stadium.

Canberra were led by Blake Austin and Josh Papalii who both scored tries in their return to the Raiders’ 17, after spending last week in the NSW Cup.

The Raiders opened the scoring in the tenth minute when they opted to play the ball down the blind side on last tackle, with Joseph Leilua throwing a perfect cut out pass from dummy half to Jordan Rapana who dived over to score.

Rapana nearly had his second just five minutes later when Aiden Sezer put in an inch perfect cross-field kick for the winger, only for the bunker to rule that Rapana had lost the ball into a Parramatta defender during the pickup.

The Raiders wouldn’t be denied a second time when Blake Austin threw a dummy and darted through the Eels’ defensive line to score under the posts.

In the last play of the first half, Shannon Boyd was penalised for holding back Kenny Edwards, who was chasing his own kick, which allowed Mitchell Moses to kick a penalty goal and reduce the Raiders’ halftime lead to 10-2.

Moses’ effort was cancelled out soon after the break when Jarrod Croker kicked a penalty goal of his own, once again extending the lead into double figures.

Josh Papalii further extended the Raiders’ lead when he barged his way over the try line from five metres out.

Things didn’t get any better for the Eels in the 55th minute when Daniel Alvaro was sent to the sin bin for repeated infringements.

With little over ten minutes left it was the Raiders turn to be reduced to 12 men, with Luke Bateman being sent to the sin bin.

The Eels nearly capitalised on their numerical advantage immediately, with Kirisome Auva’a crashing over, only for the bunker to rule there was an obstruction in the lead up.

Parramatta piled on the pressure late but the Raiders’ defence held strong, securing them their second consecutive win. 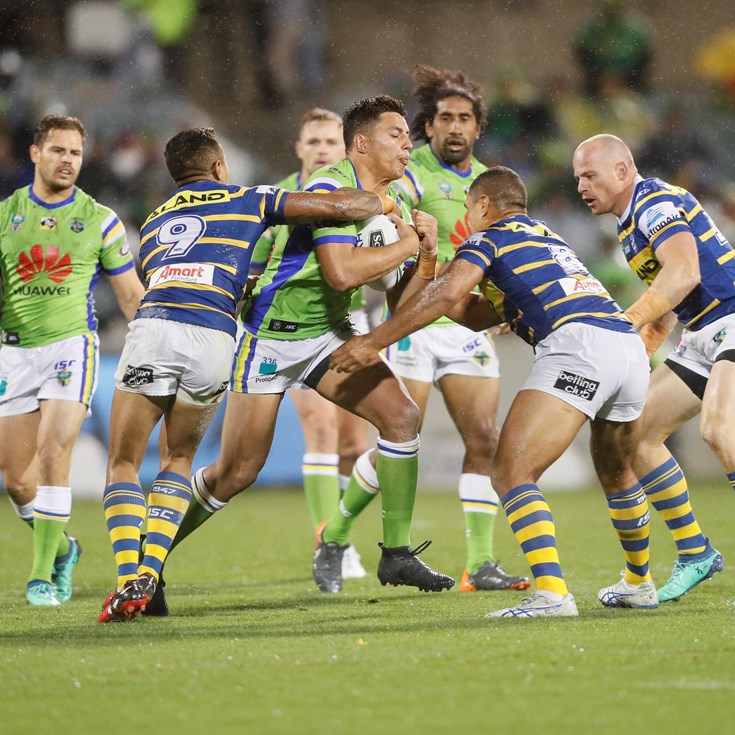 By the numbers: Raiders v Eels

Round 6: The Final Word