The Canberra Raiders have recorded their first away win of the season beating the Cowboys 18-8 at 1300SMILES Stadium in Townsville on Saturday.

Having not won in Townsville since 2006, the Raiders defended bravely conceding just one try despite having to make over 30 tackles inside their own 20 metre line.

The Cowboys opened the scoring with a Johnathan Thurston short ball putting Gavin Cooper through the line to score untouched under the posts.

Back to back sets on the Cowboys line and the Raiders scored their first points with a Siliva Havili short ball to Josh Papalii seeing the lock forward power his way over from close range to level the score.

In the final minute of the first half, Nick Cotric was inches away from taking the lead for Canberra as he put his foot on the touch line in an attempt to score in the corner.

The Cowboys were over in the fourth minute of the second half but had the try ruled out due to a forward pass just short of the line from Ben Hampton.

With seven minutes gone in the second half, the Cowboys regained the lead through a penalty goal to Thurston.

Some broken play and Raiders halfback Aidan Sezer pushed away from two defenders to score next to the posts to take the lead with just over ten minutes gone in the second half.

Michael Morgan sliced through the line on halfway with twelve minutes to play but a massive tackle from fullback Jack Wighton knocked the ball loose ten metres out from the line.

With just over five minutes to play, Havili caught the markers napping and took off from dummy half to fight his way over the line and ground the ball to extend the lead to ten. 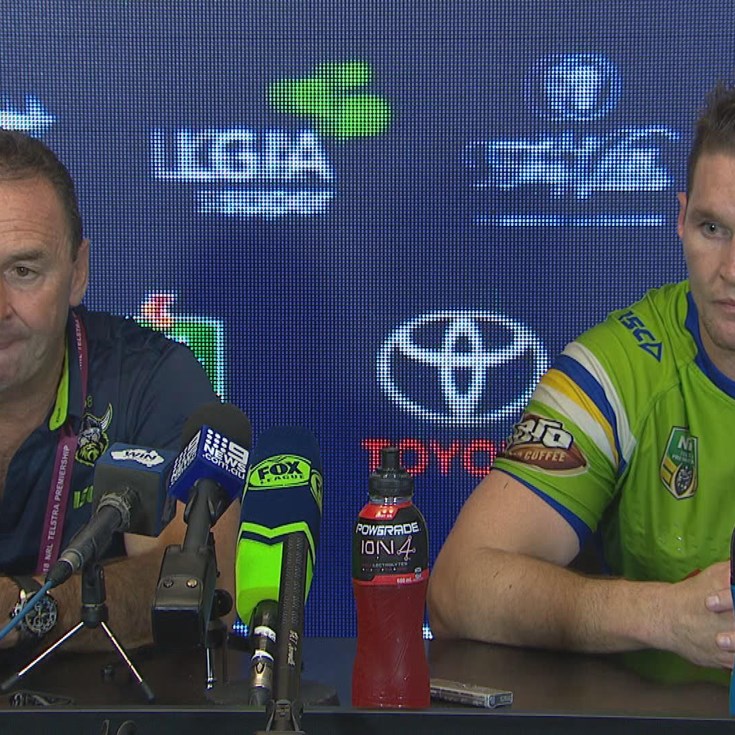 Whitehead: We'll be doing everything we can to win"