The Canberra Raiders finish off their run of three-straight away games with a clash against the Penrith Panthers at Panthers Stadium on Sunday afternoon.

Last week the Raiders lost 44-10 against the Storm in Melbourne in their biggest loss of the 2018 season.

The Panthers are coming off a come from behind win against Manly where they won 28-24 after trailing by 18 points with just 13 minutes left.

The Raiders welcome back Aidan Sezer and Shannon Boyd from injury this week with Jack Murchie and Liam Knight making way.

Nick Cotric and Brad Abbey have swapped positions, with Cotric moving from wing to fullback, and Blake Austin has shifted to the centres.

The Panthers have named an unchanged line up, with Sione Katoa to play with a broken nose, although Reagan Campbell-Gillard has been named in the reserves and is a chance to return after missing six weeks with a broken jaw.

Last Time: The Panthers snatched a one-point win when these two met in round 14 earlier this year.
Canberra led by 10 points with 13 minutes left but two late tries and a Nathan Cleary field goal won Penrith the game against an injury-depleted Raiders.

Jordan Rapana has been one of the Raiders' best in recent years, scoring 44 tries over the last two seasons and being named the Dally M Winger of the Year in 2017. His try scoring numbers haven't quite reached the dizzying heights of previous years this season, but he has once again been an explosive presence in the Canberra line up.

He loves to get his hands on the ball and has made 72 dummy half runs in 2018, the fifth most in the NRL and by far the highest total by a non-hooker. Rapana has scored four tries in his last four games and he will look to continue his red-hot form at Panthers Stadium on Sunday afternoon.

Josh Mansour has had an injury-disrupted season and has only played eight times in 2018. Since returning from a fractured cheekbone he has scored in each game he has played in though, as well as showing the form which saw him represent New South Wales and Australia. This week is his first home game since round six and no doubt he'll be looking to get over the stripe again on Sunday.

In Aidan Sezer's first game back from a hamstring injury he comes up against the current New South Wales five-eighth in James Maloney. Sezer's kicking game this season has been superb all season, regularly creating try scoring situations and forcing nine dropouts. He had led the Raiders to a run of three wins in four games before his injury and he will no doubt be hoping to recapture that form this weekend.

One of the few who can rival Sezer's kicking game is Maloney, who has settled into life at Penrith brilliantly, leading the Panthers into premiership contention. Maloney has averaged over 250 kicking metres per game and has been instrumental to the success of both his club and his state this year. Neither side can afford to underestimate the opposing five-eighth with this matchup potentially deciding the winner of Sunday's contest.

Viliame Kikau played a handful of games in 2017 before absolutely bursting onto the scene this year. In the 18 games he has played in 2018, he has made over a thousand post-contact metres, broken 75 tackles and made 31 offloads. He has been an absolute machine for the Panthers whether it is coming off the bench or starting in the second row. He's good for a line break per game and is one of the hardest men to tackle, with the ability to break a game wide open. The Raiders must shut him down on Sunday or they risk the big man running riot.

Joseph Tapine has missed a fair chunk of football this season due to suspension, but when he has been on the field he's been great for the Raiders on their left edge. Tapine has run the ball hard for the Raiders as well as displaying some handy passing and making plenty of tackles for the Green Machine. Just as Kikau is a destructive force for the Panthers, Tapine is one for the Raiders, and any weaknesses in either sides' edge defence will be exploited come Sunday afternoon.

"After last week it was pretty tough but the boys are always ready to rock and roll because that's who we are as Raiders." -Sia Soliola

Head to head: There has been little to split the Raiders and the Panthers in their previous 74 meetings.

Canberra have been victorious on 36 occasions, with the Panthers winning 37 times and one match finishing as a draw. 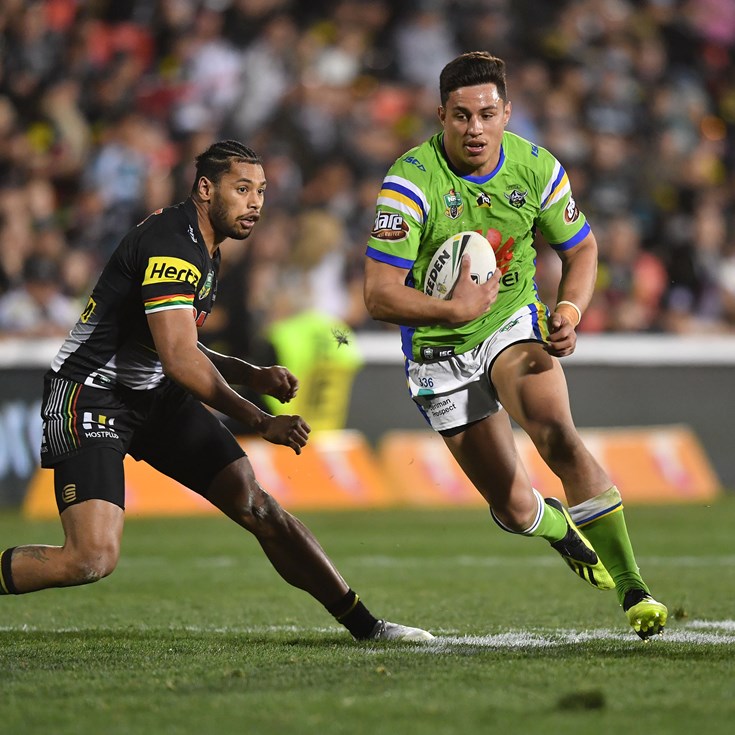 By the numbers: Raiders v Panthers

Vote Now: Man of the Match Round 21