The Canberra Raiders have secured a win in their last home game of the 2018 season by beating the South Sydney Rabbitohs 24-12 in front 15,990 fans at GIO Stadium on Saturday afternoon.

The Raiders went into the sheds at half-time trailing before outscoring South Sydney 20-0 in the second half to secure a memorable win.

The Rabbitohs drew first blood ten minutes into the contest when Cody Walker received the ball 15 metres out from the Raiders' tryline and proceeded to step past Blake Austin and palm off Brad Abbey to score.

South Sydney had their second try when Greg Inglis crossed for his 19th career try against the Raiders in as many games after he shrugged past Joey Leilua's one-on-one tackle to score out wide.

A blast from the past was to follow when Damien Cook hooked in the scrum and won the ball for the Rabbitohs against the feed which South Sydney capitalised on by taking the two when they were awarded a penalty the following play.

Canberra hit back when Josh Hodgson grubbered from dummy half for Michael Oldfield who expertly grounded the ball centimetres short of the dead ball line.

Less than two minutes before half-time Canberra looked to be over again but the referee ruled Sam Williams' spiral pass was forward, ensuring South Sydney led 12-4 at the break.

When the Raiders were awarded a penalty early in the second half Blake Austin took a quick tap only to be brought down by Jason Clark who was sent to the sin bin for committing a professional foul.

The Raiders immediately made the most of their numerical advantage with Hodgson again combining Oldfield to create a try, this time it was a bullet pass from the Englishman which allowed Oldfield to hit a hole and score.

Canberra were nearly over again after Jordan Rapana made a break down the right and kicked the ball infield, but the ball bounced on the dead ball line before Abbey could reach it.

The Raiders took the lead for the first time of the match when Austin took the ball to the line on last tackle before putting Sia Soliola through a gap to score.

Nick Cotric joined the try-scoring party when he spotted a half-gap and burst his way through the line to score.

With less than two minutes left Williams secured the win for Canberra by kicking a penalty goal to extend the lead out to two converted tries. 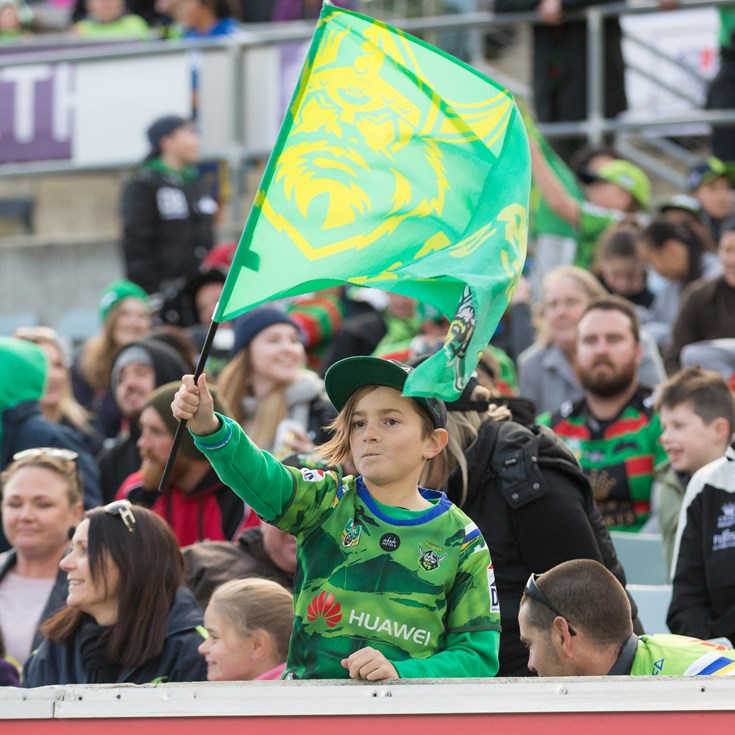 Match Highlights: Raiders turn it on against Rabbitohs

Member Appreciation Round at GIO Stadium this Saturday