Jarrod Croker has surpassed 2000 NRL points, becoming the youngest player the reach the milestone as the Canberra Raiders defeated the Gold Coast Titans at GIO Stadium.

Jack Wighton played his part with a first-half double as the Raiders managed to claim a 24-6 victory in front of 10,060 fans.

The Green Machine started their assault early after capitalising on a Titans error, with Wighton crashing over from short range after three minutes.

The Raiders continued their raid and crashed over again after a late offload from Corey Horsburgh gifted Wighton his second try of the evening.

Croker subsequently bought up his 2000th career point after slotting the conversion over the black dot.

Some inspired goal defence helped keep the Titans out after an enterprising set came to an end after a great try stopper from George Williams.

Croker almost had his first try of the season after new recruits Curtis Scott and Williams linked to break the Titans line only for Williams to knock the ball on at the death.

It didn’t take long for the men in green to find the stripe again, Emre Guler scored his first career try after a beautiful ball from Josh Hodgson.

Wighton would continue his assault kicking a 40/20 in the 32nd minute, however, would force one pass too many in the subsequent set as the Raiders were unable to capitalise and took an 18-0 lead into sheds.

Charnze Nicoll-Klokstad did not return to the field as he failed his HIA and was replaced by Bailey Simonsson with utility Michael Oldfield replacing Simonsson on the wing.

Gold Coast would be first to score in the second half through winger Anthony Don in the fifth minute.

The Raiders were under a wave of pressure after a unsuccessful captains challenge lead to the Titans having a lot of possession inside their opposition 20.

The Raiders were able to stave off the Titans attack after Elliott Whitehead plucked a grubber from mid-air where he found Croker in open space.

After spending 20 minutes after immense pressure, the Raiders found themselves with decent field territory after a forward pass inside the Titans half.

The Raiders would pounce on the opportunity, after three consecutive sets on the Titans line, Guler threw a short ball to Whitehead who crashed over adjacent to the sticks.

Joseph Tapine was placed on report after an alleged should charge attempt on Brian Kelly with just under nine minutes remaining.

A Michael Oldfield error and a penalty close to the Raiders line gave the Titans field territory but they were unable to crack the green brick wall.

Croker would leave the field for an HIA and received a standing ovation from the Canberra faithful with just over two minutes remaining.

Hodgson drilled the ball into the sideline on the last play as the Raiders got their season off to the perfect start. 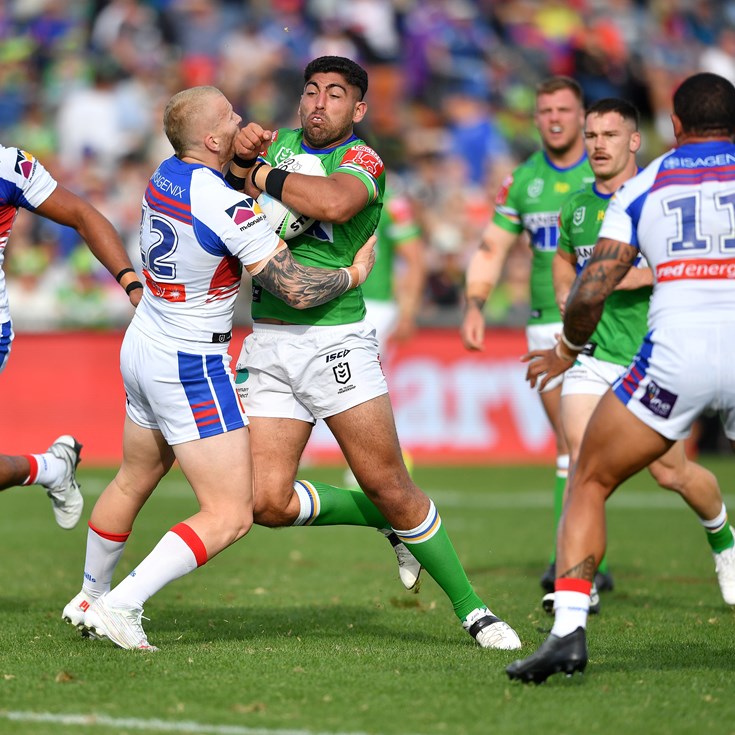 Tapine Free for Round Two