The Melbourne Storm defeated the Canberra Raiders 20-14 at GIO Stadium in a physical encounter.

Brenko Lee opened the scoring after nine minutes of play, off a kick from Jahrome Hughes that Charnze Nicoll-Klokstad failed to ground before the Melbourne winger raced through. Cameron Smith successfully converted for a 6 – 0 lead to the visitors.

In a first half that was riddled with errors from both sides, the Raiders first points came after 22 minutes when Josh Papalii crashed over the line off the back of a dropped ball from Justin Olam. Jarrod Croker kicked the goal to even the scores at 6 – 6 after 23 minutes of play.

Off the back of their points, the green machine dug deep to come up with a huge defensive effort which forced Melbourne to work the ball out of the corner, but a lost ball from Charnze Nicoll-Klokstad and a subsequent scrum penalty helped Melbourne down the field.

As the visitors looked like scoring, Bailey Simonsson was sent to the bin with 12 minutes to go in the first half. The winger was ruled to have taken out Josh Addo-Carr off the ball in a try-scoring situation.

In simultaneous blows for the Raiders, Josh Hodgson went down with a knee issue that saw him leave the field and not return.

Addo-Carr then scored off the next set down Simonsson’s wing and Smith added the two to put the Storm ahead by 6.

A couple of set restarts helped Canberra work their way down the field to force another goal line drop out, but Melbourne pushed the limit with the referee after drop out bell sounded.

An error from Canberra off the drop out gave Melbourne possession on their 40, but Cameron Smith lost the ball with 3 minutes to go in a game that kept both coaches on edge.

Ryan Papenhuyzen’s field goal attempt was unsuccessful as the half time bell sounded to go into the break at 12 – 6 to the visitors.

The drama returned after the break as the errors and penalties continued, with Smith kicking a penalty goal to earn his team another two points for an eight-point lead.

Ryan Papenhuyzen scored the first try of the second half when he collected a kick and ran 60m downfield, which was successfully converted by Smith for a 14 point lead as Melbourne closed in on the win.

The Raiders came close a couple of times with Elliott Whitehead being denied a try after losing the ball before the in goal, and a potential Simonsson try was denied due to an obstruction.

With 10 minutes to go, a quick ball from Jack Wighton to Croker put Nick Cotric into space to score down the side for the Raiders second try of the night. Croker’s conversion was unsuccessful as the scoreboard read 20 – 10.

The Melbourne captain knocked on for his second of the night with four minutes to go on Canberra’s goal line to give the green machine another shot.

With less than two minutes on the clock, a try to Charnze Nicoll-Klokstad gave the Raiders a glimmer of hope but it ultimately wasn’t enough. 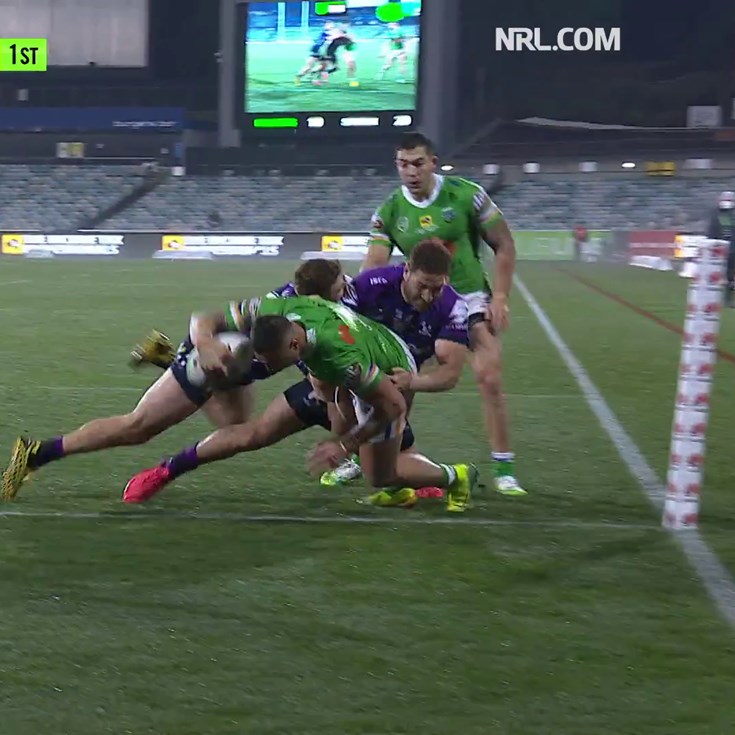 Quick and classy hands from Croker puts Cotric over