The Queanbeyan Kangaroos sit in fourth spot after their win in the Match of the Round, while there were some tight results in other games.

The Queanbeyan Kangaroos held off a Bushrangers comeback to claim a six point win at Seears Workwear Oval on Saturday.

The Roos lead 16-6 at the half-time break, with first half tries to Alifelti Ngahe, Thomas Casey and Mitchell Sullivan. Bushrangers winger Jack Davison was the try-scorer for the visitors.

Queanbeyan started off the second half well, and it was former Raider Reece Robinson who beat multiple defenders to crash over the try-line. Lachlan Ingram converted to give his side a 20-6 lead.

Tuggeranong then staged a comeback, with second rower Patrick Birch scoring a double, making the score 20-14.

The Bushrangers threw everything they had at the Roos in the final couple of minutes, but it wasn't enough as they Roos held on for their third straight win.

The win sees the Roos finish the round in fourth spot on the ladder, one point behind the third placed West Belconnen Warriors.

The Gungahlin Bulls bounced back from their last round loss with a dominant victory over the Woden Valley Rams at Phillip Oval.

The Bulls flew out of the blocks, jumping to a 24-0 lead after 18 minutes, with tries to Tristan Eldridge, Matthew Fellows, Lucas Thomson and Dylan Hately.

Rams centre Aidan Kawiri and winger Lachlan Eveston then scored for the home side, making it 24-8 at half-time.

But the Bulls came out firing in the second half to snuffle out any chance of a Rams comeback. Thomson grabbed his second try of the day and Rourke O'Sullivan scored in the corner to put the Bulls ahead 34-8.

Eveston scored two more tries to bring up his hat-trick, with Scott Swanson scoring as well for Woden.

Matthew Richards and Brendan Dunn were the final try-scorers for Gungahlin.

The Bulls remain outright first on the ladder after ten rounds, while the Rams sit on the botttom.

The West Belconnen Warriors recorded their fifth win of the season, defeating the Goulburn City Bulldogs at Raiders Belconnen.

The Warriors lead 14-0 at the half-time break, after tries to Andrew McDonald, Jack Beagley and Kirren Roughley.

It was a hard fought first 15 mins of the second half, before West Belconnen centre Ryley Thomas finished of one of the tries of the season, putting the home side ahead 18-0.

Goulburn then staged a comeback, with Thomas Croker and Dillon Rota both crossing the try-line, but they were unable to break the Warriors defence again.

West Belconnen sit third on the ladder, with Goulburn trailing them in fifth place.

The Queanbeyan Blues claimed their second straight win with a tight six-point victory over the Belconnen United Sharks.

It was a see-sawing first half of footy, with both sides going try for try. The scores were locked at 12-12 at half-time.

Sharks forward John Papalii crashed his way over the try-line right after the break, Campbell Woolnough converting to put his side in front 18-12.

But the Blues then went on to score three straight tries, with Josh Mitchell, Isaiah Latu and Julius Tupou all crossing for four-pointers. Nukurua Ngere scored for the Sharks with a minute to go, making the final score 30-24.

The Blues remain in second place after ten rounds, while the Sharks sit in sixth place. 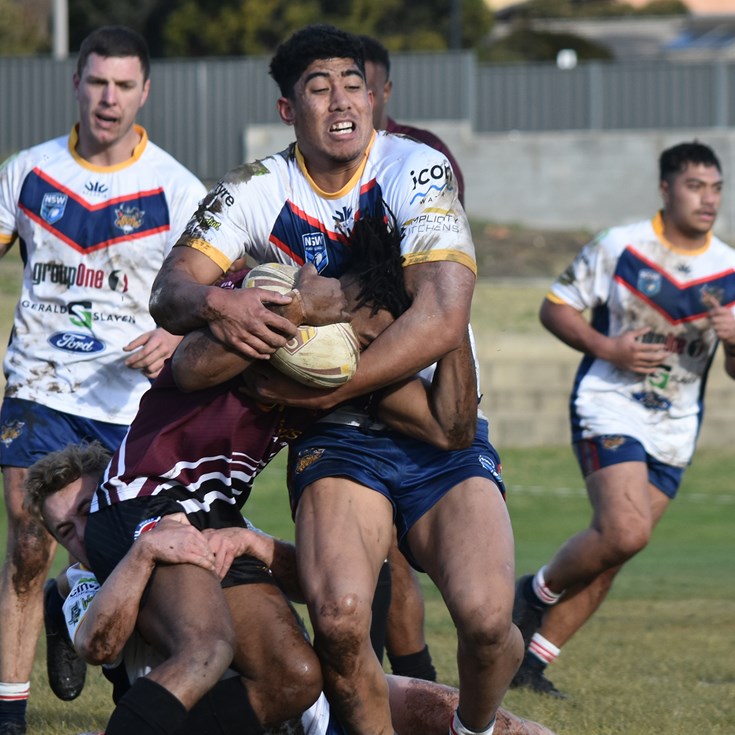 Around the Grounds: Saturday 3 July

Roos survive late comeback to win three in a row

Redeem your complimentary ticket to this weekend's Raiders home game