Many rugby league fans were surprised when the Raiders announced the signing of St Helens outside back Jordan Turner yesterday.

Turner will join the Raiders for the 2017 season on a two-year contract, linking up with his former St Helens teammate Sia Soliola.

Raiders recruitment and high performance manager Peter Mulholland was recently in the UK searching to uncover super league talent to bring back to Canberra, with Turner's recruitment one of the outcomes from the trip.

“We all know the success that we’ve had with the signings of Josh Hodgson and Elliott Whitehead, so we wanted to see if there were any other players in the Super League or at a junior level who we think we might like to give an opportunity to at the Raiders,” Mulholland said after his trip.

Turner has played over 200 games for Salford, Hull FC and St Helens in the Super League, and was voted as St Helens player of the season in 2013.

It's been an ambition of Turner's to play in Australia for some time, driven by the fact his mother Julie was born in Wollongong.

Turner's versatility will come in handy at the Raiders, as he is able to cover a multitude of positions. Considered by many to be at his best in the centres, Turners can also play five-eighth, lock and in the backrow.

It was at lock where Turner played when he and Sia combined to help St Helens win the 2014 Super League Grand final over Wigan Warriors.

"When Sia was at St Helens we got along really well. We won a grand final together and I spoke to him a bit about what Canberra's like and how it is playing under Ricky. He was very helpful," Turner said.

"I'm a keen watcher of the NRL and I know what the competition is like. Obviously I haven't played in Australia, but I'm pretty aware of the standard that's expected. I speak to some of the other Australian's in England about playing in the NRL and they all talk about it in high regards.

Turner has experienced what it is like taking on a NRL team, squaring off against Daniel Tupou earlier in the year when the Sydney Roosters travelled to England to versus St Helens in the World Club Series. 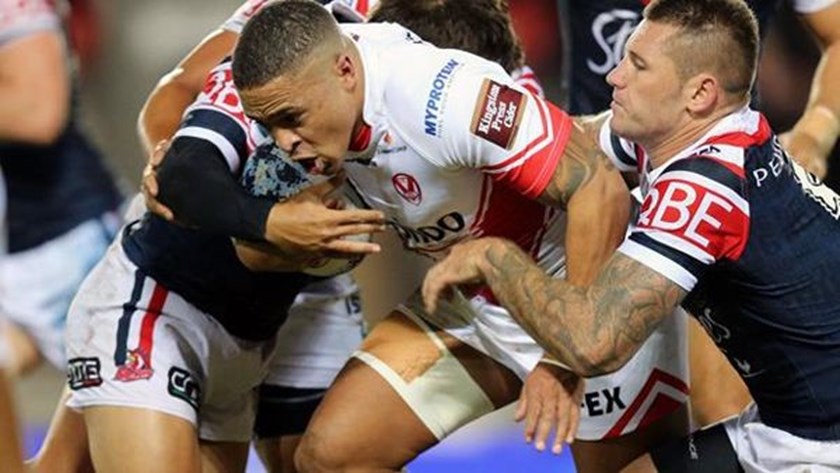 At close to 190cm and just over 100kg, there's going to be plenty of questions during pre-season over where exactly Turner will fit into the Raiders squad that already boasts excellent depth in the backs and forwards.

"I know it's going to be quite tough for me to break into the team. The centres are pushing for Origin, the backrow is great and the halves are going really well," Turner said.

"I can pretty much play anywhere. I'm just going to train hard and make the most of my chance when I get to Canberra."

Josh Hodgson, Elliott Whitehead and now Jordan Turner. The Raiders English connection keeps on growing and after the success of Hodgson and Whitehead there's no reason for it to stop anytime soon.